“Primary Water” or “Juvenile Water” is “new” water that is in, or derived from, materials deep within the Earth and has not previously appeared at the Earth’s surface or circulated in the atmosphere.  It is available worldwide regardless of climate or geology. Instead of depending on the atmospheric water cycle driven by solar energy, this water source is part of the Primary Water cycle which is driven be Earth energy. 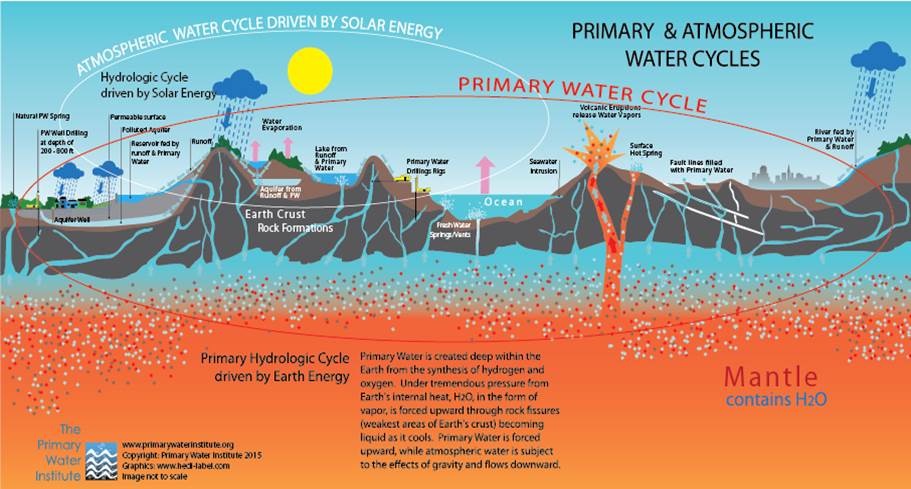 The mantle of the earth contains large quantities of H2O. Primary water is created from different sources:
a) Magmatic and volcanic water, by the synthesis of hydrogen and oxygen under tremendous pressure from the earth’s internal heat.
b) Metamorphic water, to be freed by transformation from one rock to the other caused by very high pressure.
c) Oceanic water, caused by subduction of tectonic plates into the earth mantle. 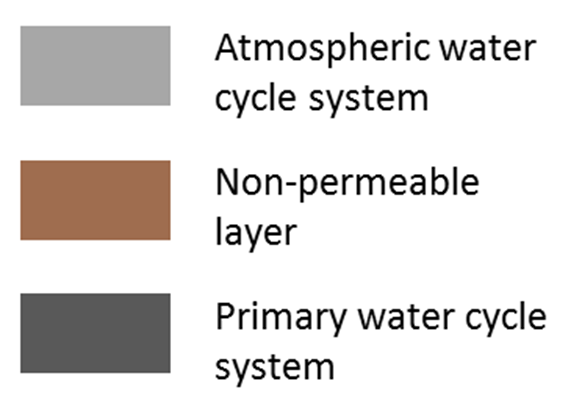 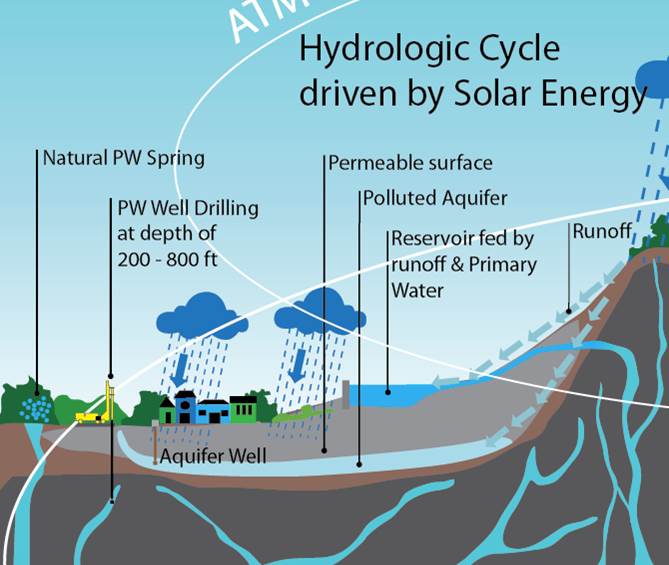 Any aquifer that is perched beneath this permeable material is subject to pollution from the surface by the presence of humans and animals.

Sometimes a primary water spring manifests on top of a mountain co-mingling with run-off water. 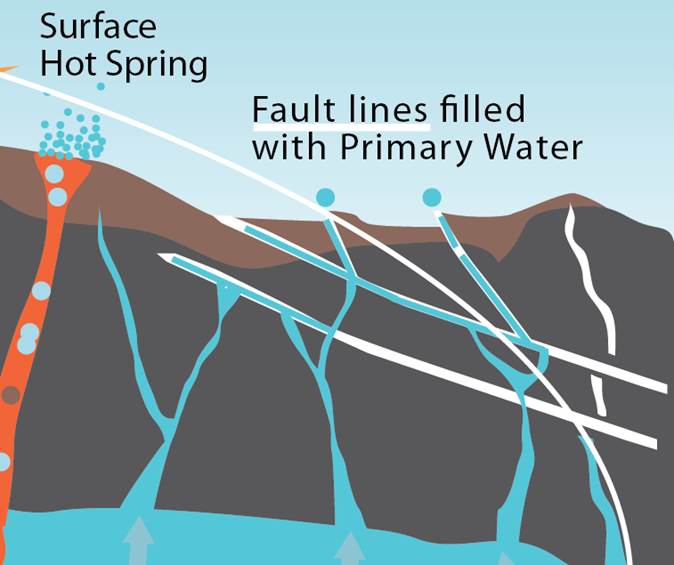 Primary water rises from the mantle via the faults, fractures and fissures of the crust where it recharges rainfed aquifers, many lakes and the oceans.

H20 in the form of vapor is forced up through the weakest areas of earth’s crust, the rock fissures, and it becomes liquid as it cools.

Surface hot springs are usually directly connected with a hotspot below.

At many places primary water is constantly added to the hydrosphere.

In other places, primary water fissures do not reach the surface.

Drilling rigs can access those subterranean primary water sources by drilling vertically or horizontally into the fracture zone or fissure.

It is our mission to locate and access primary water fissures with high yields worldwide to end water scarcity now!

The theory of earth-generated water was primarily developed by a German scientist, Stephan Riess, who created the term “primary water”. He discovered many hundreds of wells in the US and globally in the second half of the 20th century by locating drilling points and drilling bore holes in base rock formations. He did what he announced to do in an interview in 1953 and was extremely successful.

Stephan Riess and Dr. Armin Bickel knew each other and worked together on some projects.

Stephan Riess became the mentor/teacher/well drilling partner of Hydro-Geologist Pal Pauer, the founder of the Primary Water Institute. Pal Pauer collaborates with Mark Burr from Primary Water Technologies who is our cooperation partner in the United States.

If we are beginning to form an organization and a group of us men getting together to index our work, our petrographic, our crystallographic, our geological structural conditions, I am sure that it will be only a short while from now to train men and go out and determine the location and produce water wherever we wish. There is no limit, state or country.
Stephan Riess, 1953

Water – the next big thing

Water scarcity is probably the most important pressing issue globally. It is said that water will become more valuable than oil, and that future wars will be fought for water.

New water for a thirsty world

The approach of earth-generated water offers a new solution to water stressed countries. It was first described in detail in Michael H. Salzman’s infamous book “New water for a thirsty world” which was published in 1960. But the origins are way back in history: Leonardo Da Vinci reported about the existence of water veins in a number of his documents and was able to locate them. Isaac Newton and Albert Einstein were also familiar with the phenomenon of primary water.

However, public science has ignored the concept and the evidence of the presence of primary water (deep groundwater) and failed to account for this water as a new water production source. There is a simple reason for that: The entire water business of today benefits from the existing paradigm of scarce water resources: Water treatment, transportation, distribution, conservation, cleaning, recycling. This science consensus is wrong and must be challenged.

The primary water theory can no longer be denied. New groundbreaking scientific research from 2017 disproves the core assumption of public science that Planet Earth neither contains nor generates water within. Moreover, there is evidence for many primary water wells existing all over the world.