The radiometric survey is our key technology. We are using scintillation counters for measuring gamma radiation emanating from the Earth because it provides valuable information about elements and structures of the underground. We detect sub-surface resources of water bodies, oil prospects, kimberlite pipes and potentially gold and other metals, by using both the background radiation and spectrographic analysis of specific isotopes.

Schematic view of a photomultiplier coupled to a scintillator, illustrating detection of gamma rays.

How we use our scintillation counters 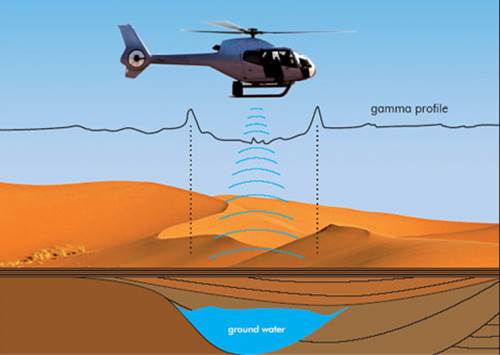 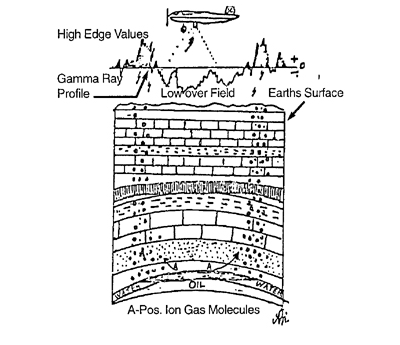 Image source: Operating manual written by Dr. Armin Bickel
The background radiation coming from the inner Earth shows subnormal activity when it passes through water and oil. This pattern allows detecting water and oil reserves, depicting its boundaries and determining the best spots for exploration drillings.

The specific scintillation counters that we are using provide quantitative and qualitative results, making possible a large number of geophysical analyses, i.e.: 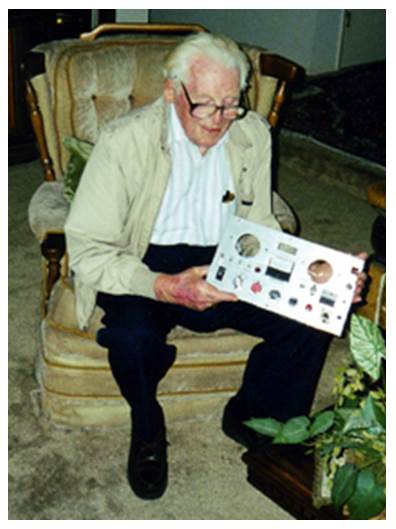 The scintillation detectors that had been developed by Dr. Armin Bickel some 40 years ago in the United States were successfully used to uncover oil reserves in Texas and California, and gold and copper deposits in French Guayana in the seventies. Mobile scintillation counters based on this technology have since been further developed by us. This geophysical remote sensing technology allows locating underground water and oil reservoirs as well as identifying specific radioactive isotopes of chemical elements by measuring gamma radiation.

Dr. Armin Bickel was a member of the NASA team of Wernher von Braun, the father of the Apollo program that sent man to the moon. After his retirement, Dr. Bickel developed portable scintillation counters with very high accuracy. Both von Braun and Dr. Bickel emigrated from Germany to the US after WW II.

Dr. Bickel was an endowed researcher and had a wide knowledge spectrum, most of which is not available anymore today.

However, Dr. Bickel introduced Edgar Gummerum to the “secrets” of his proprietary method of interpretation of scintillation counter signals.

This video describes the pilot project in Madagascar. (It is the same video which is shown on the “Summary” subpage.) Survey made by Hartmut Sieper.

We employ different analysis software and visualization tools. The profile line (left) allows us to follow the survey track step by step and to see all details of the amplitude. With a heat map we can directly identify the most interesting areas for further examination and compare the data with the physical structure of the surface.
Continue to
Passive Seismic